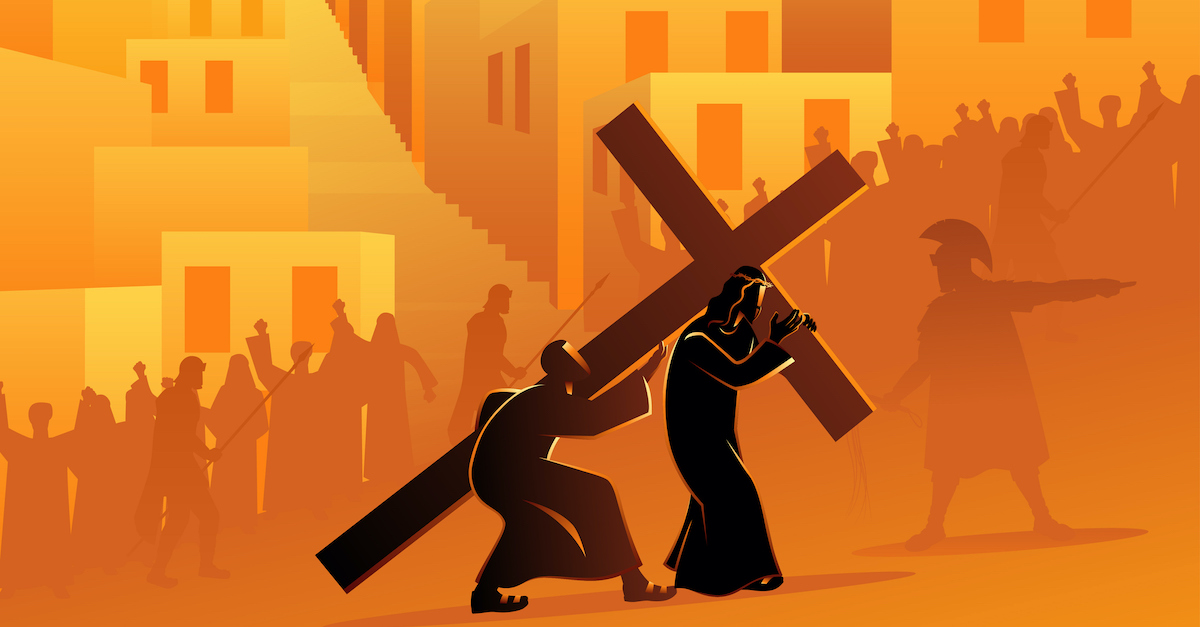 When we read the story of the crucifixion, we read a story with many details, each holding a special meaning. Among those details, we meet Simon of Cyrene: a person whose legacy has left a significant impact. Who was Simon of Cyrene, why did he carry the cross of Jesus, and what does it mean for us?

The account of the crucifixion begins at the Antonia Fortress in the heart of Jerusalem, where Jesus would have been tried, flogged, and condemned to crucifixion. The winding route Jesus would have walked from here led him through the city to the hill outside the city where he was crucified. The journey would have encompassed about a half-mile of winding road, and it on this road that Simon encounters Jesus, and becomes a part of the story.

The Story of the Man Who Helped Jesus Carry the Cross

Simon of Cyrene has just a passing mention in the Scriptures; his name appears in only three verses, all pertaining to carrying the cross for Jesus. This event is recorded in Matthew 27:32, Mark 15:21, and in Luke 23:26. While this is the only time he is mentioned in the Bible, it is important enough that he is mentioned by three of the four Gospel writers.

It is also interesting that each of these three writers, in giving the same account of the same event, all give us the information a little bit differently than the others. Such is the beauty of Scripture – each verse alone feeds our spiritual needs, yet Scripture as a whole tells us a full, rich, undeniable story of God’s unfolding story of love for us.

Taking a look at these three verses, along with John’s version which doesn’t mention Simon, we can see the different aspects of the story:

Mark tells us that Simon was the father of Alexander and Rufus. Why would that matter, and how would Mark know this? The best explanation is that the early readers of this Gospel knew who Simon was, and knew his children as well. We also know that there is a man named Rufus at the church in Rome, so it is not a stretch to think that this co-laborer for the gospel may well be the son of Simon of Cyrene mentioned by Mark. Mark also tells us Simon was on his way in, meaning he was actually headed the opposite direction, and going into Jerusalem while Jesus and the others were going out.

Luke tells us that Simon was forced to carry the cross behind Jesus. In a deeper way, this symbolizes the understood position of any disciple: walking behind their Lord. But it means something more here. Simon could only go as fast and as far as Jesus went, and we know that Jesus was too weak to carry the cross on his own. It appears that Simon, who was literally following Jesus, would eventually become a true follower and disciple of Jesus.

John tells us only that Jesus carried the cross out of the city but doesn’t include the events that happened after Jesus had left the city.

What Do We Know about Simon of Cyrene?

We can learn a bit about Simon just by his name. The name ‘Simon’ was a common name at the time and is a name shared with several others in the New Testament, most notably the Apostle Simon Peter. Simon means “hearer” or “he has heard”, and must have had an especially strong meaning for these men in particular, who had literally heard the good news of Jesus, and been so intimately a part of that good news. We also know that Simon was from a place called Cyrene, so why was he in Jerusalem?

Cyrene was a city in what is now modern Libya in Northern Africa and had a significant Jewish population. The fact that he is ‘of Cyrene’ tells us that he did not live in Jerusalem where this event takes place but had traveled there from his home. We do not know with certainty whether he was a Jew or Gentile, but it is not a stretch to speculate that he was in Jerusalem for the Passover, as many Jews from around the world made their way to Jerusalem for this feast, as it was the most important feast that the Jewish people celebrated.

Roman soldiers had the right to place someone into their service to carry things for one mile. This could be bags, equipment, or in this case, a cross. On occasion, a person would be asked to walk ‘an extra mile’ in service to the Romans. This is likely the scenario that led Simon to carry the cross for Jesus. We don’t know why Simon specifically was selected for this task, other than the fact that he was there, he looked capable, and it was clear Jesus had become too weak to carry the cross on his own.

Is There Anything Unusual about Jesus’ Path to the Crucifixion?

Roman crucifixion in itself was not unusual but was a common practice of the Romans as a form of capital punishment and intimidation. Crucifixion was considered too horrible a punishment for Roman citizens, as it was a miserable, humiliating, painful form of death. In fact, our word excruciating is derived from the Roman word for crucifixion – crucis. The Romans reinforced their grip on power through such horrible techniques. Likewise, the actual path Jesus walked, known as the Via Dolorosa, and the hill where the crucifixion took place, known as Calvary (Latin) or Golgotha (Greek), were most likely familiar places for this kind of scene.

What Should Christians Take Away from the Story of Jesus and Simon?

As we read the account of Simon of Cyrene today, we see a man who was quite literally thrust into the very heart of the gospel story. It must have been a frightening moment: to be pulled from the crowd by hated Roman soldiers and told to bear the cross of a condemned man. Simon felt the weight of it upon his back and walked away with the blood of Christ still upon him, the blood that would shortly fulfill all prophecy and take away the sin of the world. That cross, and that blood, carried a weight and a significance that Simon could never carry. When Jesus took back the cross and gave his life upon it, Jesus carried the weight of all our sins.

It is unlikely that Simon ever imagined that this forced act of service would be discussed and admired over 2,000 years later. Simon’s actions seemed to mirror the words Jesus had spoken to his disciples in Matthew 16:24: ‘Whoever wants to be my disciple must deny themselves and take up their cross and follow me’.

In the same way, we are called to change directions, ‘take up our cross’ and ‘follow Jesus’. We may never know what impact our daily sacrifice will have on others, perhaps an impact beyond our own time. Yet we can be assured that our actions in following Christ will most certainly have an impact and will give life and meaning to those around us.

Jason Soroski is a homeschool dad and author of A Journey to Bethlehem: Inspiring Thoughts for Christmas and Hope for the New Year. He serves as worship pastor and in Colorado and spends his weekends exploring the Rocky Mountains with his family. Connect on Twitter, Instagram, or at JasonSoroski.net.

6 thoughts on “Who Helped Jesus Carry the Cross?”