As Beverly Cleary celebrates 100 years, I reflect not only on how much the world has changed over the last century, but also on how much it has remained the same. The characters she created so many years ago still resonate strongly with children today, and hold a special place for many of us who grew up reading about them.

The first ‘chapter book’ I ever read was Henry Huggins. In fact, I still remember every minute detail surrounding my reading of it…

It was 1980, and Fridays were ‘library days’ for my first grade class at Kratz Elementary School, and we would walk single file (mostly) down the hall to the library on Friday afternoons. As a first grader I wasn’t supposed to be browsing in the chapter book section. Our 1st grade class was generally pointed in the direction of books for younger readers including Caldecott winners (among which are many truly wonderful titles, by the way), such as “Where the Wild Things Are”, but I was born a bookworm and was innately fascinated by the aisles containing chapter books. I felt a kind of awe for these Titans of Literature; brimming over with quotable wisdom and containing more words than pictures.

The school librarian, Mrs. Guller, and my teacher Mrs. O’Reilly were lovers of literature as well, and they had the wisdom to know a bookworm when they saw one. That said, it was not long before I was walking out of the library with a checked out copy of Henry Huggins in hand.

I now had a chance to read a real, honest to goodness chapter book!

Based on the cover art it was a story about a boy like me, and a dog like mine that the boy seemed to carry around in a big box. I was excited to find out more about them both. Kratz Elementary was built in 1957, and this book published in 1950 had the look and feel of a book that had been moving on and off that same library shelf for quite a long time. It very well may have been.

I got through Chapter One that day in class after finishing my assigned class work, and was excited to carry it home to read over the weekend. Saturday morning found me in the corner of the living room snuggled into our old tan recliner starting into Chapter Two. Then Three. Then Four.

I soon realized it is hard to put a good book down, and that what I held in my hands was a good book. I stayed in that chair for most of the day, following my imagination down Klickitat Street, and getting acquainted with Henry and his family, his friend Scooter McCarthy, that pesky Ramona and the Quimby Family. I was mesmerized by stories of Henry doing things only a kid would do, like watching helplessly as a football was thrown into an open car window, bringing a stray dog home on a bus, and digging around in the park for night crawlers. I also remember going through most of a can of original Pringles while reading, but that’s beside the point.

The point is that the characters created by Beverly Cleary continue to be so endearing because they are so relatable. Even in our technologically saturated society, decades removed from the slower paced world of Klickatat Street, the kids in her books still act and think like real kids, and the adults act just like real kids expect adults to act.

In an age when superhero movies are rated R, TV shows are essentially off-limits for kids after 7:00, and very few forms of entertainment remain truly family-friendly, these books remind us that the goal of entertaining everyone from 8 to 80 is very achievable.

Once I finished Henry Huggins, I was a devout Cleary fan. It wasn’t long before I had gone 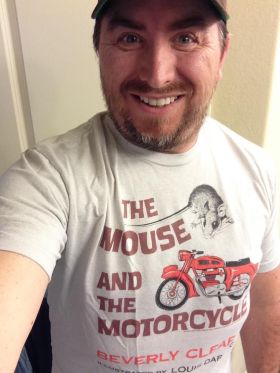 through every Henry Huggins book I could get my hands on, while not neglecting every Beezus and Ramona book, The Mouse and the Motorcycle, Dear Mr. Henshaw, and eventually  Otis Spofford and Mitch and Amy.

These books are still among my favorites today, and are also loved by my children. It wasn’t very long ago that my kids found a mouse living in our backyard, and one of them suggested that maybe we should see if he could ride a motorcycle. I was only disappointed that I hadn’t thought of it first.

It is safe to say that much of the reason I spent over a decade teaching English and am a writer today can be traced back to the joy of reading that was fostered when I was young. Beverly Cleary set out to write books for the boys who visited her library and asked for books about “boys like us”, and she succeeded in doing so.

She will most likely never know the impact she had on this particular boy who found one of her books in a school library in 1980, but I certainly hope she knows that her books have inspired several generations of young readers and writers, and that they continue to do so.